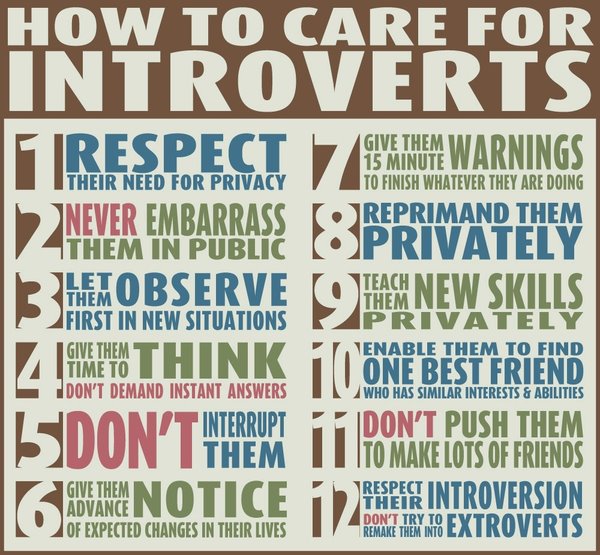 I get the good intention behind this poster that has been going around for a while now, but I respectfully disagree with it. It is based on the premise that being an introvert is actually a handicap of sorts and requires special attention. It also labels people, which is something that I vehemently disagree with in the strongest of terms.

I have seen, and continue to see many people that actually succumb to the expected behavioural patterns of the labels that they’re assigned by society to the point where they start acting the way they’re conditioned to do so rather than because it’s something they would actively or consciously do. The moment we label people’s state of mind, we set in motion many negative sequences and patterns of behaviour.

The point I’m trying to make is that unless there is a physical defect that causes someone to behave strangely, any awkwardness or unusual behaviour is simply a symptom of their self-esteem or present state of mind. If this label of introvert were true, you would never see an ‘introvert’ light up the moment they find they’re in their element amongst people they can trust where their contribution is appreciated and they have no need to feel incompetent or insignificant. If they were truly afflicted with a state of ‘introvertism’ then that kind of behaviour would never be possible.

It’s not about introverts versus extroverts. It’s about confidence or a lack thereof. It’s a simple matter of someone feeling significant and appreciated, or not. And don’t confuse it with someone that is naturally introspective versus someone that has no time for the detail that begs to be observed. It’s simply about focus, personal preferences, and the like.

Some colleagues of mine once played a trick on one of their co-workers. Despite the guy being perfectly healthy, they all conspired to make comments about how he wasn’t looking very well at all, and that he really should take time to rest. They repeated this cycle for a few hours in the morning with various people making comments about the way he looked, his demeanour, his eyes looking tired, etc. By lunchtime, he felt physically ill and asked for time off work. And he looked ill as well.

Another experiment carried out on kids in the first or second grade showed how negative associations play out in actual academic performance. Half the kids in the class were given blue ribbons to tie around their heads with the other half given red ribbons. The one group was told that they got the blue ribbons because they weren’t so smart, and the other group was told that they were smarter than the blue team. That resulted in the normally smart kids with blue ribbons suddenly doubting themselves and slipping back when asked questions in class, while kids that were normally slackers wearing red ribbons were suddenly enthusiastic and engaged.

We often respond to the labels and stereotypes that society places on us without realising it. It starts out innocently because it just makes it easier to put people into boxes the moment they act against the norm, but this convenience for the ‘normal’ people has massively detrimental effects on those being boxed in this way. This instant gratification culture that we have going suggests that anything out of the norm should be fixed with a pill. It’s made us lazy to apply our minds and to engage meaningfully. Anything outside the norm is inconvenient and shunned unless it has a sensational or fashionable quality about it.

Sorry for the word spam, but there’s so much more that can be said about this. The bottom line is:

Please don’t label people’s state of mind just because they appear to be different. It’s the ones that sit back and observe that see things with a fresh perspective, rather than the ones that fit in and do nothing but perpetuate the norms, that actually add to the wholesomeness and progress of society. The rest just maintain the status quo.

Author, life coach, and mental health activist. We need to change the narrative from disorders, illnesses, and survival to accountability, understanding, and thriving.

You give what you have

Get all latest content delivered to your email a few times a month.